I had two visitors over the weekend - orphan kittens who needed more than a daily visit when my friend and co-foster parent D- went away for the weekend. One of them was Sharea, whom you met in a previous post. The other was a little tuxedo boy who's been through a few names already in his maybe eight weeks of life, and is currently going by Captain Jack, or Jack, or sometimes Jackie. 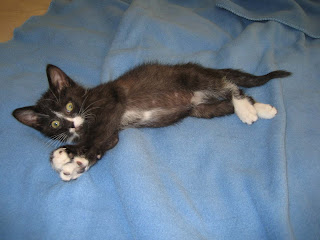 Isn't that a cute tummy? Every tuxedo cat is unique. Jack has a little white bikini, and you can see just the bottom outline of his black heart - just like Cricket's!

Jack was taken in by the rescue group from a veterinarian's office, where he had made his way after possibly being hit by a car and deposited on a Good Samaritan's doorstep. He has a spinal cord injury that currently leaves him with a nearly paralyzed right hind limb and tail, and some bowel and bladder dysfunction that has yet to be fully defined.

Unfortunately, as I watched him over the weekend it became apparent that he was actually incontinent of stool, and not doing well at all in trying to evacuate his little bowels properly. When he vomited a couple of times and his distress levels increased I took him back to the vet, where we discovered a very large, distended colon that was FOS. (You can figure out what that means.) So he stayed there for a few kitty enemas and observation.

D- and I visited him in the hospital yesterday. He's showing some slow recovery in the muscles around his hip and tail, so we're all hopeful that this little bout of constipation was primarily a side-effect of his pain meds, and that once he's cleaned out and with some recovery time his bowel function will normalize. I hope so. He'll be very hard to adopt out if he's incontinent. 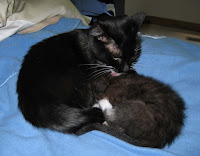 But while we're waiting for all that to sort out, we're enjoying Captain Jack. He's a little scruffy right now, but you know I have a weakness for tuxedo cats. My bigs seemed delighted to have kitten company, especially without a momma attached. D- has a theory that cats make friends more easily when they look like each other. I don't know if that's true, but it was very cute seeing Cricket meeting Jack. You could just see his little pea brain working, "Momma!," as he ran forward to try to nurse. Cricket was so funny, alternately growling, bopping, and washing him, as those warring emotions worked themselves out on her face.

Say a prayer for a little guy who's had a hard start in life.

It's Tummy Tuesday. To see more of the (feline) sunny-side-up variety, visit LisaViolet.
Posted by gottagopractice at 7:24 AM

Oh what a cutie pie! I do hope his health issues will resolve by themselves and that even if they don't resolve, he will still find a good loving home.

Jack is adorable. Theo and I will say a prayer that Jack gets healthy soon.

Sending get well soon purrs for little Jack.
We have a Jack at our house too.
Happy Tuesday!

As if orphaned kittens don't tug on my heartstrings enough, now you've got an orphaned partially paralyzed kitten. I must curl into a fetal position and sob now. When I've recovered I'll say a prayer for sweet little Jack.

Jack is so cute and wow, what a story!

Cellists and Other Musicians I Read