You probably don't remember, but in one of my first posts describing Sweetie and the Sugar Babies I mentioned that Sweetie likes donuts. I captured some of the evidence on video. In one hand I have the camera, and in the other, a donut. As I recall, it was half of a rather stale old-fashioned buttermilk donut that I was eating for breakfast. (I'm not proud, but I do occasionally have entirely non-nutritious CHO-laden junk food for breakfast.)


She really, really wanted a bite of that donut.

In subsequent weeks, DH and I modified our behavior to accommodate a cat that was interested in any food that was left on the counter, as well as on our dinner plates. My own cats are well-behaved, and I think nothing of leaving food out on the counters. Here is the evidence of a few of our lapses, and some that I have never experienced with a cat before. 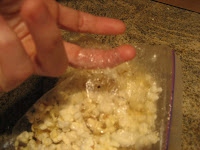 Eating the popcorn with Sweetie circling the bowl was a feat. I put the last couple of handfuls in a baggie and left it on the kitchen counter. The next morning I found it on the floor, and you can get some idea here of the holes that had been chewed in the bag. 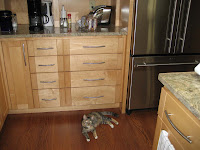 What a pretty cat, sitting calmly on the floor in the kitchen. But what's that on the counter? 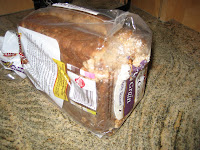 No loaf of bread was safe with Sweetie in the house. This was the result whenever we forgot to close the garage door on the bread and toaster. 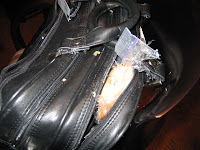 One day DH set his briefcase down on a chair by the counter when he came home from work. What is that faintly groaty thing sticking out of the open pocket? 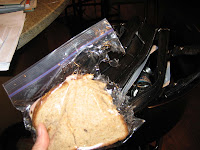 Looks like an uneaten ham and cheese sandwich from lunch. I hope he didn't intend to eat that later. It was clearly too much for Sweetie to resist. She's made quite a project of trying to dig it out of the barely opened pocket.

Here she is, caught in the act. We had obviously become a little too complacent, but who would have thought she's go after a bag of cantaloupe? 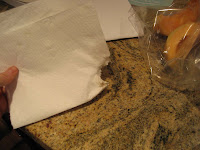 Eh. Not cantaloupe. She was eating the corner of a napkin that had been used to mop up something greasy. A bit of donut, perhaps?

Two days before Sweetie went back to the shelter (she returned last Sunday with the last two kittens, Candy and Sugar) it occurred to me that with such a strong drive for food, Sweetie was a good candidate for clicker training. That's short-hand for positive-reinforcement-based training where a sound (click) is used to mark exactly the behavior you are trying to encourage, and then something the animal desires, usually food, is given to them as a reward.

We were having salmon for dinner, and as usual were closely guarding our plates as Sweetie circled around the backs of our chairs, onto the window sill, making attempts on the table. First I set her down on the floor, clicked (I used a tongue click, the "tock" that you make when you remove your tongue from the roof of your mouth under pressure), and gave her a bit of salmon. You should have seen the surprised look on her face.

Thereafter, I CTd (clicked-treated) any movement away from the table. I CTd the first motion toward sitting. Soon her butt was glued to the floor. Every couple of minutes of sitting, I rewarded her again. By the end of dinner I had a cat who was quietly begging, sitting by my chair, instead of making strafing runs on my plate. This took no more than 10 small bits of salmon. At the end of dinner she got one last click, then a bonanza of all of the salmon skin cut up in small pieces, on a plate in the place where she usually eats.

DH was amazed. At the next meal we repeated the performance with bits of lunch meat and cheese from my sandwich. She already started out beside my chair instead of on the table. When she would climb onto my chair I pet her, but no food, and she got a CT each time she returned to the floor, where she daintily accepted each bit of food from my fingers. At the end of dinner I announced "all done" as I removed the plates, and she calmly went on to other activities. 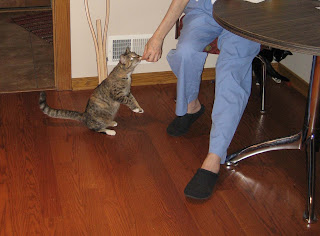 I know some would argue that any begging is unacceptable. I'm not fond of it, myself. But this was a huge improvement in just two training sessions. I think the hardest thing about clicker training is deciding exactly which behavior you want to reward. In my case, I didn't want to desert my dinner, so I took the easy path of just getting her off the table. I would have had to spend some time thinking about what I would rather have her do than sit by my side on the floor.

I'm kicking myself that I didn't think of this earlier. Think of the things Sweetie could have learned to do, as well as becoming a much better behaved cat. I hope the special person who adopts her appreciates how smart she is, as well as how beautiful.
Posted by gottagopractice at 10:35 AM

Poor dear Sweetie must have a lot of plastic in her gut from all that chewing of sandwich bags. I hope she only takes small bites. I'm going to miss her.

I miss Sweetie, too. It was much harder for me to take an adult cat back to the shelter than a kitten. I'm going to try to stick to orphans in the future, and I think the bigs would appreciate that policy, as well.

That is so great, about the CT. I wonder if it works with aggression?

Older cats are very hard! I work at a shelter, so I am very interested in your fostering experiences!

I mean hard to give up--not "hard" like they're bad or anything. It's just difficult to see a perfectly sweet cat get passed over because it's not the right color/age/sex/doesn't match the carpet/whatever.

I've read success stories about alleviating fear-based aggressive behavior in dogs using clicker training. In cats, most people I've read about use it to train alternative behaviors to pre-empt the aggression. There are lots of testimonials about it generally improving the disposition of the animal - they just think it's fun.

And yes, hard is an understatement. I'm planning to visit Sweetie at the shelter this afternoon. My heart is breaking at the thought of her back in prison. I saw the photo of her they put on the web site... a true mug shot.

Cellists and Other Musicians I Read